(While I most definitely “see through a glass darkly,” I wanted to share with you  some of the research I’ve done as I have tried to understand a little bit more about the Kingdom of God. As you will see, I am really fond of Ladd’s The Presence of The Future , probably because  I agree with a lot of what he has to say (just being honest). While this is in no way a comprehensive study on the Kingdom of God, I do hope it will cause you to think and seek the Lord earnestly about these things.)

There is an abundance of discussion pertaining to the Kingdom within the ecclesia today. One could almost say that we have become inundated with “Kingdom Talk,” and there are as many points of view as there are people discussing them. If we are to understand the relationship between the Church and the kingdom we must first understand exactly what the kingdom is. Are the Kingdom and the church synonymous? If not, what is the church’s role and message in the world as it relates to the Kingdom? These are the questions we shall explore in our present endeavor.

Ladd insists that the New Testament never equates the believers with the kingdom, and that the message of the early church was the Kingdom of God and not the church itself.[2] Despite the analogies in the parables of the Kingdom given by Jesus in the gospels, one must resist the temptation of declaring the Kingdom and the church as synonymous. Ladd concludes that the parables, specifically the parable of the tares found in Matthew 13, have “nothing to do with the nature of the church but rather teach that the kingdom of God has invaded history without disrupting the present structure of society.”[3]

The Kingdom takes its departure from God, the church from men. The Kingdom is God’s reign and the realm in which the blessings of his reign are experienced; the church is the fellowship of those who have experienced God’s reign and entered into the enjoyment of its blessings. The Kingdom creates the Church, works through the church, and is proclaimed in the world by the church. There can be no Kingdom without a church- those who have acknowledged God’s rule- and there can be no church without God’s Kingdom; but they remain two distinguishable concepts: the rule of God and the fellowship of men.[5]

Once it as been established that the Kingdom and the church are indeed separate entities, perhaps the question should be asked in what way is the church an instrument of the Kingdom. Is the church the means by which the Kingdom of God is ushered into the world?

There is much talk within the church, especially within the Dominionist and Emergent factions, that the church should infiltrate the various sectors of “secular” governance, and work to usher in the Kingdom of God upon the earth. These factions see it as necessity for the church to institute the rule of God in the society and culture of contemporary historicity; a posture which has had adverse effects when assumed in the past.

According to Murray Rothbard, it was ideology including Christian involvement in politics that precipitated the “welfare state” now entrenched in American society. Rothbard says: “A critical but largely untold story in American political history is the gradual but inexorable secularization of Protestant postmillennial pietism over the decades of the middle and late 19th century. The emphasis, almost from the beginning, was to use government to stamp out sin and to create a perfect society, in order to usher in the Kingdom of God on Earth. Over the decades, the emphasis slowly but surely shifted: more and more away from Christ and religion, which became ever-vaguer and woollier, and more and more toward a Social Gospel, with government correcting, organizing, and eventually planning the perfect society. No matter how commendable the goal of such tactics, there is not one example in the entire Bible of political or social “activism” ever being advocated or used by God’s people.”[6]

If the Church is an instrument of the Kingdom and not the Kingdom itself, if it is indeed to be understood as an evangelistic tool and not a political movement, it behooves the church to understand the message it is expected to declare to the world. What is the declaration the King would have His citizens declare to those who have not yet submitted to the rule of God?

The King himself has given the church the paradigm for Kingdom preaching. The gospel that Jesus preached was that the Kingdom of God, while to be completely consummated in the future, had indeed, by the appearing of himself, come into history. Again, Ladd gives a beautiful summation asserting that Jesus’ Kingdom message was: God is a seeking God, God is an inviting God, God is a Fatherly God, and God of judgment, who in the person of Christ is acting redemptively upon the earth.[7]

“Jesus proclamation of the presence of the Kingdom means that God has become redemptively active in history on behalf of his people. This does not empty the eschatological aspect of the Kingdom of its content, for the God who was acting in history in the person and mission of Jesus will again act at the end of the age to manifest his glory and saving power. Both the present and the future display God’s Kingdom, for both present and future are the scene of the redemptive acting of God.”[8]

The message the church should be preaching to the world is the same one Jesus preached during his earthly ministry. The gospel of the Kingdom is that God has now come in the person of his Son to seek out, and invite mankind into a relationship with himself through Christ, thereby escaping the judgment which will be executed upon those who are unwilling to submit to his rule. The church proclaims in its message, and displays by its ethics that while the final consummation of the Kingdom awaits future realization, the reality is that the Kingdom of God has indeed come.

While Jesus never talked about building the kingdom or of his disciples ushering in the kingdom as do so many within today’s ecclesia,[10] the church is indeed inextricably bound to the Kingdom in that it is both its creation and instrument. Until that time in which the not yet is eternally transformed into the now, the church will be that which is made up of them who cry, “Thy Kingdom come thy will be done on earth as it is in heaven.” 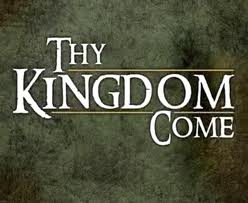 One thought on “Thy Kingdom Come”