I guess one thing we all have in common is that we tend to “compartmentalize.” I am not a psychologist (a few of my friends probably thing I need to see one though), but it’s my understanding that each of us separate thoughts and actions into “compartments” in order to cope with reality. Psychologists tell us that compartmentalization can be used as a defense mechanism, one that assists people in dealing with tragic occurrences in their lives. I’m one who would rather folks come to Jesus in situations like that, and let him actually heal and restore instead of simply tucking away the hurt, but that’s another conversation altogether. My point is that I think maybe we all do compartmentalize in one way or another, and I don’t think it’s always good. And, I think we as Christians tend to be among the chief “compartmentalizers.”

So many Christians separate their lives into compartments: this is work, this is family time, this is time with my friends, and this over here is my “God-time.” Our “worship services” are put into different compartments as well: this is worship time, this is offering time, this is prayer time, this is preaching time, and so on. Something that I have come to understand is that true worship is a life laid down. It’s the place where sacrifice and obedience meet through our trust in the Lord. There is no need for compartments-Jesus is my life. If you look into the Bible you’ll find many references of people who wanted to be religious, who kept offering up sacrifices, but whose lives were compartmentalized to the point that they did not understand that their disobedience revealed the fact that they were not true worshippers of God, that they did not truly know him. 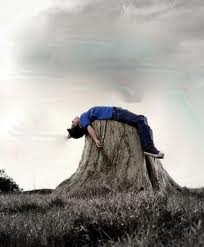 King Saul is a good example of someone who didn’t understand that worship is a life laid down. You may recall that Israel had wanted a king.  Saul, who the Bible describes as tall and handsome, was anointed the first King of Israel. You can see from the beginning that it appears that Saul only had a relationship with God when someone else was around (good observation Mike). The only time you see him interacting with the Lord is when he was the prophets of Gibeah, or with Samuel the prophet. In fact, if you read on in the Old Testament you’ll discover that during the reign of Saul, the Ark of the Covenant (representing God’s presence) was not sought at all. Saul never came to know the Lord.

In I Samuel 15, Saul had been commanded by God to utterly wipe out the Amalekites- I mean utterly. However, Saul decided to spare their king along with the choice livestock to “sacrifice to the Lord.” When the prophet Samuel arrived, Saul rushed out to meet him proclaiming, “I have obeyed the commandment of the Lord!” Samuel asks, “Well, what’s up with all the sheep I’m hearing?” Saul replies, “Oh, we only spared the best of the sheep and the oxen for God, but we destroyed everything else.”

Samuel then proceeds to rebuke Saul, reminding him of how God had made him king, and asking him how he could not then obey the Lord’s commands to utterly wipe out the Amalekites. Saul persists, “But I did obey the Lord. I have brought Agag the king, and destroyed everything else. Only the best part of the spoil was saved to sacrifice to the Lord.” Samuel replies,

“Has the Lord as great delight in burnt offerings and sacrifices,
as in obeying the voice of the Lord?
Behold, to obey is better than sacrifice,
and to listen than the fat of rams.

For rebellion is as the sin of divination,
and presumption is as iniquity and idolatry.”

Rebellion is an act of usurping an authority, in this case God. Samuel said that rebellion is similar to witchcraft or divination. How’s that? Well the ultimate goal of witchcraft is to manipulate events. The sorcerer seeks to manipulate spiritual forces so that a desired result will be manifested in the physical. When Saul rebelled against God, he was taking matters into his own hands in an attempt to bring about the outcome he thought was best. He wanted to exercise authority. God had spoken, but he rejected his authority and chose his own way.

Samuel went on to say that stubbornness or insubordination is like idolatry. Say what? Well, when we rebel against God, stubbornly pushing against him, or trying to push him to do what we think is best; we are setting ourselves up as God- idolatry. (Oh, I forgot to mention the fact that just before his meeting with Samuel, Saul had set up a monument to himself in Carmel.) In his stubbornness, Saul had declared, “I am god!” His rebellion and stubbornness blinded him to the reality of his disobedience.

Okay, so how does all of this apply to us? The reason Saul, and we as well, are rebellious and insubordinate towards God is because we don’t trust him. God is working in the events of our lives (even the hard ones) to help us get to know him and thereby trust him. He wants us to listen to his voice, lay down our lives and surrender to him, not just offer up what we think he wants. As we learn to trust the Lord, our sacrifices and obedience come together in a life laid down. Saul never learned that. God used him, he won many battles and was the champion of Israel, but; he never came to trust in the Lord. God had a little compartment in Saul’s life to live in, and he only got to come out when Samuel was around. Saul only sought to manipulate God through offering up the sacrifices he thought would push God towards doing what he wanted Him to do. And in the eyes of God, this was akin to witchcraft and idolatry.

We, here in the West, consider ourselves far too civilized and advanced to worship some kind of idol made of wood or stone, instead; we have proclaimed ourselves as god. Even we who name the name of Jesus are guilty of creating a god after our own likeness and worshipping it instead of the true and living God. We have invented a god who is okay with our witchcraft and idolatry, one who winks at our rebellion and insubordination. We have turned his grace into a license to sin. Like Saul, we offer God our disobedience as a sacrifice, and cry foul when he demands our lives instead. True worship is not simply an act that we perform. True worship is born out of our trust in God. True worship is the place where our sacrifice and obedience come together, expressed in a life laid down.

To be continued… (Next, we look at Abraham.)

(By the way, Christians, we need to repent of reading horoscopes and the little magic emails that guarantees a “blessing” if you just forward it to ten people. That’s straight up witchcraft-just saying)