There’s plenty of talk about unemployment nowadays; so many are looking for jobs. But, let me say what I think we need are more Jobs. You know, the guy in the Bible. It’s not popular among us Christians here in the West to talk a whole lot about suffering. We have been led to believe that the best way to show people how great the Lord is is for them to see you driving a Mercedes and living a luxurious life. Yep, we are all too eager to “work” for a God like that, but not many of us are willing to take the job if it carries with it the possibility of being a “Job.” No sir, it is a hard job being a Job; however, the benefits are literally out of this world.

It is strange for us to imagine that there are times when our suffering is the way in which we can most glorify the Lord. However, when you read the book of Job, you learn that sometimes; it is through our suffering that God is glorified and we gain deeper revelation as to his tender mercies. I know that to our sensitive American ears that sounds crazy, but it’s true. The Bible tells us that Job “was blameless —a man of complete integrity. He feared God and stayed away from evil.” Yet, we find that God allowed Job to lose everything: family, friends, health, wealth, and position. Why would a good God allow these things to happen to Job- to us? 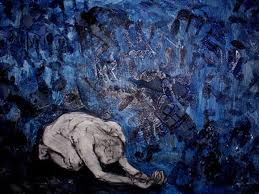 Have you ever considered that belonging to God means that you are willing to allow him to use you as a living testimony? You’ve heard the old saying, “You may be the only Bible some people will ever read.” Well, if you’ve read the Bible, you know life aint always easy. We tend to think that we best show who God is by being some super anointed prophetic superstar whose very shadow causes people to “fall out” when we walk through Wal-Mart, but the reality is, sometimes; it’s the patient endurance of the suffering saint that best points to the One who is himself our strength and reward. Are you willing to let God use you to make himself known not only on the mountain top, but in the valley as well? Are you willing to be the “loser,” the “failure,” and the one who suffers injustice if those situations will best demonstrate the power and reality of God in your life?

“For God called you to do good, even if it means suffering, just as Christ suffered for you. He is your example, and you must follow in his steps. He never sinned, nor ever deceived anyone. He did not retaliate when he was insulted, nor threaten revenge when he suffered. He left his case in the hands of God, who always judges fairly. He personally carried our sins in his body on the cross so that we can be dead to sin and live for what is right. By his wounds you are healed. Once you were like sheep who wandered away. But now you have turned to your Shepherd, the Guardian of your souls.”

Our suffering, like the suffering of Jesus, is to be reconciliatory. When we give up our “rights,” and place our very lives in God’s hands; he can use even our suffering to bring healing and restoration into the lives of others. Was not Jesus considered by the majority to be a failure and a loser? Yet, it is through his suffering that we have been reconciled to God and healed from our sins. Are we willing to follow in his footsteps in this way? God used Job’s suffering to give Job and those around him a better understanding of who He really is. Job’s suffering turned both his and his friends’ theology upside down. At the end of Job’s story, there was healing and restoration.

Yes, we definitely need more Jobs. We need Christians who understand that communion with the living God through Jesus, in the Spirit, is their portion and reward. And, because of this awareness, are willing to allow God to use even their suffering to glorify His name, making Him known to those around them.