I often have the opportunity to sit with “church leaders” of various ethnicities in the Charlotte NC area and discuss many hot button topics. As you could probably guess, as of late, the Presidential Election has been the prevalent topic. While the conversations have always remained civil and respectful, I couldn’t help but notice that there was an “elephant” in the room which we all avoided mentioning- racial tension. Sides were being taken along racial lines, and it really grieved my heart that no one (including me) addressed the issue. This got me thinking about the verse in I Peter 2, where Peter says, “But you are a chosen race, a royal priesthood, a holy nation, a people for his own possession, that you may proclaim the excellencies of him who called you out of darkness into his marvelous light.” Hmm… race, nation… Is there anything we can learn from this other than the usual, “I’m royalty.” bit?

Peter tells his readers that they are a chosen γένος (genos) or race. That’s where we get our word gene, genetic, etc… He also calls them an ἔθνος (ethnos) ἅγιον (holy) or holy nation. Ethnos, hmm…ethnic, ethnicity- interesting.  I began to think of the diverse audience to which Peter had written. I thought of the social and cultural context in which they existed. Here were a people (Jew & Gentile alike) scattered throughout Pontus, Galatia, Cappadocia, Asia, and Bithynia, living under the oppressive hand of the Roman Empire. If you weren’t a Roman citizen, chances are you were having a pretty bad day. In the midst of this difficulty, Peter wants the believers to understand that they are a holy “ethnic group,” intentionally chosen by God. Brothers and sisters, in Christ, we are no longer white or black Americans. We have been made into a brand new, holy ethnicity!

As children of God, we are a new creation. We are in Jesus, and there is no Jew, Gentile, Black, or White.  A new man has been created in Christ. A new, holy “ethnos” has been made out of every kindred, tribe, and tongue! 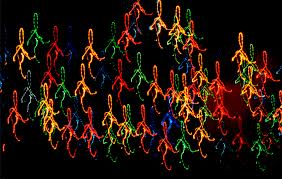 There is no place for racism of any kind in the body of Christ for we are all together a chosen race and a holy nation. When we as members of the body of Christ define and/or divide ourselves along racial lines we are being carnal and have forgotten that we are literally joined together as one in Christ. When we make distinctions along racial lines according to the flesh, referring to “our people,” “our this,” or “our that”; we have forgotten who we are in Jesus. Frankly, I as a middle-aged, white, southern, male Christian should be more at home with my black sister from New York than I am with a middle-aged, white, southerner who doesn’t know the Lord. Think about it. The same Holy Spirit is conforming us to the image of Christ. Shouldn’t we have more in common with each other than with the world? Shouldn’t we resemble one another? Shouldn’t we desire  fellowship  with one another more than we do the fellowship of those who are our “kindred” after the flesh?

Brothers and sisters, a President is not the hope of our people. A transforming political ideology is not what our people need. We have a King, and his name is Jesus. We are one in his Spirit, a chosen race, a holy ethnicity. There is one Lord, one faith, one baptism, and though we are many; we have been made partakers of the same Spirit. So, while in the world, comments like, “You can’t possibly understand because you’re not black/white.” may be the norm, in the body of Christ, we know each other after the Spirit. We always have common ground and avenues of understanding because in Him, we are one.

The political process has served to expose the earthly-mindedness of many of God’s people. Apparently, we have become so in love with this world that we are willing to be divided from our brothers and sisters in Christ for the sake of our own carnal desires. We have forgotten that together, all of us make up the body of Christ. We belong to Him and to each other. We are called out from being simply a white man, or a black woman. We are a brand new creation in Christ. We are a chosen race with a common “genetic code.” We  are a holy ethnicity, a brand new nation of people, set apart in Christ,  to show the world the glory of our King.

5 thoughts on “A Holy Ethnicity”