The Lord only knows how many times “Away in the Manger” will be sung this holiday season. I guess millions will sing about how the “little Lord Jesus lay down his sweet head,” but I wonder how many of us actually give serious thought as to what this really means. We’re all familiar with the old saying about what happens to the man who makes assumptions, but that’s exactly what Jesus did at his incarnation. He assumed it all! But what does it really mean that the Creator of all things would come and assume every bit of what it means to be human, walk among us, and offer himself upon the cross as a sacrifice for our sins? Do we truly understand what was going on and who it was that lay “asleep on the hay”?

First, we must understand that this baby in the manger was God- God the Son. It was neither the Father nor the Spirit that assumed humanity, but the Son. John tells us in his gospel that “The Word [Jesus] was with God, and the Word was God. He existed in the beginning with God. God created everything through him, and nothing was created except through him. The Word gave life to everything that was created,…” In his first letter John further explains that “the one who existed from the beginning, whom we have heard and seen. We saw him with our own eyes and touched him with our own hands. He is the Word of life. This one who is life itself was revealed to us, and we have seen him.” That night at the manger, the Creator had come to his creation. We must understand that Jesus was fully God, in and of himself. He was not adopted as God’s Son because of the good life he lived, nor was it at his baptism that he was then indwelt by the Holy Spirit and equipped to be Messiah. No, the child in the manger was the second person of the Trinity, God almighty in and of himself.

This One who lay in the manger was also fully man. He did not merely appear to be man, pretending to be human while his divinity somehow “absorbed” his humanity. No, this baby was a real human being. An early Church Father, Gregory of Nazianzus, drove home the importance of the fact that Jesus was a real man when he said, “That which has not been assumed cannot be redeemed.” Jesus became every bit human so that he might redeem every bit of us. Any part of him that was not man is a part of us that was not redeeme 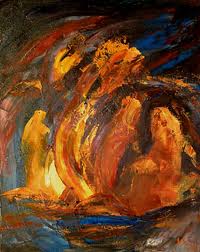 d. Though the child in the manger was indeed God, at the same time; he was indeed the Son of Man. The writer to the Hebrews tells us, “Because God’s children are human beings—made of flesh and blood—the Son also became flesh and blood. For only as a human being could he die, and only by dying could he break the power of the devil, who had the power of death. Only in this way could he set free all who have lived their lives as slaves to the fear of dying.” (Hebrews 2:14,15 NLT)

When we sing of the baby in the manger we must realize that this child is God who assumed every bit of what we are so that he might share “every bit” of who he is with us. The fact that the Son became man makes it possible for we who are men to partake of the divine nature and participate in the very life God possesses within himself, for the One who slept in the manger that night is life itself. And because he is Life, he could be the perfect sacrifice and give his life in atonement for our sins, and be the way for us to once more commune with the living God. John of Damascus said, “For since [Christ] bestowed on us his own image and his own spirit and we did not keep them safe, he took himself a share in our poor and weak nature, in order that he might cleanse us and make us incorruptible, and establish us once more as partakers of his divinity.”

I pray that this year when you hear or sing “Away in the Manger,” you will be more cognizant than ever that the One of whom you sing is the God who assumed our humanity and invites us to share in his eternal life.