Maybe I’m a little touched as they say, but riding down I-85 this afternoon, I began to see similarities between the relationship of Mr. Miyagi and Daniel-Son in the “Karate Kid,” and the way God’s Spirit works in the life of the believer as He conforms him to the image of Christ.

Remember how Daniel came to Mr. Miyagi? He came as a broken, bullied kid, believing that Mr. Miyagi would show him the secrets of martial arts. Daniel was thrilled to have this wonderful teacher, this savior who would show him how to defend himself. It seemed like Daniel figured that it wouldn’t take long and he’d be a master. He had preconceived ideas as to what the teacher student relationship looked like, and the methods the teacher should use to bring him along. Not so fast Daniel –Son!

The so-called lessons begin and Mr. Miyagi makes Daniel wash and wax his cars, paint his fence, and “sand the floor!” Daniel was a good kid, he did as he was told, but after a while; it all seemed like such a waste of time. He had been prom 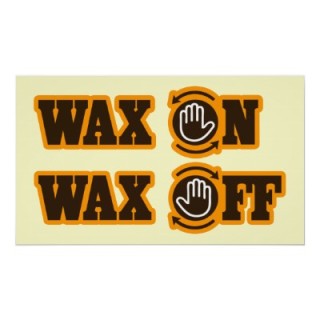 Daniel couldn’t see that Mr. Miyagi was indeed keeping his end of the bargain. He had no idea what was being done to him, how he was being changed. So often, we respond to the Spirit’s teaching the way Daniel responded to Mr. Miyagi.

We come to the Lord, and we have all these preconceived, Westernized, Hollywood ideas about the Christian walk. We figure it won’t take long and we will have arrived.  When we encounter the valleys, the hard times, and suffering, we look to the Lord and say, “You promised to teach me!  You said I’d be like you; now all I’m doing is sanding Your floors and waxing Your cars! Why are you allowing this to happen to me?” Like Daniel-Son, we don’t comprehend what is being done in and to us. We balk at the hardship, not understanding that it is the trials themselves that are producing in us an “eternal weight of glory!” God’s Spirit is at work in us, transforming us into the image of the Son. He knows that the way to do this involves our sanding some floors, painting some fences, and waxing some cars. “I promise teach karate. That’s my pact. You promise learn. I say, you do. No question. That your pact.”

In the end, Daniel-Son did become that great fighter. (He also got a really cool vintage car as a gift from Mr. Miyagi.) What lies in store for you is beyond comparison:

“There is wonderful joy ahead, even though you have to endure many trials for a little while. These trials will show that your faith is genuine. It is being tested as fire tests and purifies gold—though your faith is far more precious than mere gold. So when your faith remains strong through many trials, it will bring you much praise and glory and honor on the day when Jesus Christ is revealed to the whole world. You love him even though you have never seen him. Though you do not see him now, you trust him; and you rejoice with a glorious, inexpressible joy. The reward for trusting him will be the salvation of your souls.” (I Peter 1:6-9)

One thought on “Wax on Wax off”