Of the seven letters written to the churches in the book of Revelation, I think it is the church in Smyrna that we, the American Church, have the least in common with. The irony of it all is that I believe that the letter to Smyrna is precisely the letter we need to hear from most. Soooo, I want to take the letter verse by verse, look at some history that will help us understand how the folks at Smyrna may have received the letter originally, and then hopefully point out some relevant application for us. Let’s do it.

“And to the angel of the church in Smyrna write: ‘The words of the first and the last, who died and came to life. I know your tribulation and your poverty (but you are rich) and the slander of those who say that they are Jews and are not, but are a synagogue of Satan. Do not fear what you are about to suffer. Behold, the devil is about to throw some of you into prison, that you may be tested, and for ten days you will have tribulation. Be faithful unto death, and I will give you the crown of life. He who has an ear, let him hear what the Spirit says to the churches. The one who conquers will not be hurt by the second death.’”(Revelation 2:8-11 ESV)

Jesus greeted Smyrna with the words “[The One speaking to you is the] first and the last, who died and came to life.” Those words would have immediately gotten the attention of the people because Smyrna was literally a city that had come back from the dead. Smyrna was a piece of prime real-estate, and although it had been the site of many civil wars, its location made it advantageous to rebuild. Around 580 BC Smyrna had been destroyed by Alyattes, the king of neighboring Lydia, and had lain “dead” for centuries. It was ultimately rebuilt around 290 BC by Lysimachus and Antigonus. So when Jesus says, “I am the One who became dead bu 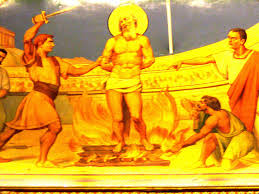 t lives,” the people were reminded of their own history, but more importantly that the One speaking to them knows first hand what it truly means for life to come through death. He is the first and last, the One who like Smyrna had died and lives. And this One would never die again! And with the suffering, persecution and death the church in Smyrna faced, it was important for them to understand that for the believer, death is not the end. In fact, it is through death that life comes.

I think the Church in America has forgotten that although we do have life in Christ, this life does not come as a result of pursuing “life, liberty, and happiness,” but from embracing the cross. Only as we die to ourselves, pick up our own cross and follow him do we know what it means to truly live. In our ease and prosperity we have forgotten that “whoever would save his life will lose it, but whoever loses his life for my sake will find it.” Our ministers sometimes see and promote themselves with such arrogant flamboyance forgetting that a true servant of the church is one who says, “But we have this treasure in jars of clay, to show that the surpassing power belongs to God and not to us. We are afflicted in every way, but not crushed; perplexed, but not driven to despair; persecuted, but not forsaken; struck down, but not destroyed; always carrying in the body the death of Jesus, so that the life of Jesus may also be manifested in our bodies. For we who live are always being given over to death for Jesus’ sake, so that the life of Jesus also may be manifested in our mortal flesh. So death is at work in us, but life in you.” – Life coming through death! We have become so consumed with preserving our lives and way of life that we scarcely speak of having been crucified with Christ and living only because of Christ who lives in us. I think we here in the West must remember that even as Jesus became a corpse and lives, so we too must participate in his death that we might live.

In the days that lie ahead, the American church may indeed find out what it means to face the tribulation the church in Smyrna endured. I pray that we will heed the words of Him who became dead but lives.