I remember years ago seeing this video and how it resonated within me. Jesus is EVERYTHING! I pray, as you watch this video, that Holy Spirit will encourage your heart in the Lord and remind you once more that Jesus is everything you need.

We are continuing our look into music/singing & worship, i.e. God Music. We are attempting to honestly set aside our presuppositions, and see what the Bible has to say about this topic. We have observed the following:

1) Worship (including singing, music, and dancing) is a natural response to salvation.

2) Worship (signing) is a natural response to God’s provision.

3) Worship is not a spectator sport.

4) Worship (and the music that accompanies it) is to be 100% God centered.

5) Musical style is not the defining element of authentic worship. The same style of music can be used in both the true, spiritual worship of God, and idolatrous abandon. It is the Object of worship and the disposition of the heart that makes God music.

6) Worship can include singing about the very thing God has provided.

7) Worship (singing) can be an encouragement to God’s people along with being a song to God himself.

8) God himself wrote a song, and commanded Israel to learn it.

I suppose the next place to look is at the song of Deborah and Barak found in Judges 5. The period of the Judges, as you recall, was a time in which the people of God were all doing their own thing- whatever 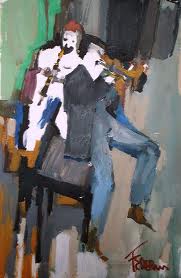 seemed right in their own eyes. However, there were times of great deliverance and revival. Singing/music continued to be a part of the worship experience.

In Judges 4, God had wrought a great deliverance through Deborah and Barak (as well as Jael, the wife of Heber the Kenite). Then, in Judges 5:1, the Bible says, “On that day Deborah and Barak son of Abinoam sang this song…” Here is an overt mention of what we would call today a “duet.” All of the other passages we have studied have more or less shown that worship was corporate, involving everyone, or at least the majority of the people. Now, we find Deborah and Barak apparently singing while the others listened.

“Listen, you kings!
Pay attention, you mighty rulers!
For I will sing to the Lord.  I will make music (ESV says, “I will make melody…”) to the Lord, the God of Israel.” (Judges 5:3 NLT)

We find that Deborah and Barak sang a song of praise to God, employing music that would have obviously been indigenous to their culture. The song they sang was about the way God had saved them, the people through whom he had worked, and even contains what may be taken as rebuke to those who had not participated in the battle. In this song, the people were also encouraged to tell of the things God had done.

Obviously there is much that could be gleaned from this passage of scripture, but what can we learn from this incident that speaks directly to the subject at hand? How about the following:

1) Singing/Music, in the context of God’s people, may sometimes involve instances where some sing and others listen.

3) God Music can include mention of the people he uses to accomplish his mighty deeds.

4) There can be elements of rebuke in God Music.

We are exploring what the Bible has to say about the relationship between worship and music. Last time we looked at the first instance recorded in the Bible of God’s people in worship (Exodus 15 The Lord had just parted the Red Sea and the children of Israel had escaped the pursuing Egyptian army). Although there is, to be sure, a lot more that could be said in regards to this passage, we came away with the following observations:

1) Worship (including singing, music, and dancing) is a natural response to salvation.

2) Worship is not a spectator sport.

3) Worship (and the music that accompanies it) is to be 100% God centered.

Now, here we are in Exodus 32. Perhaps a year had gone by (not quite sure of exact time), and we find the Israel camped out at Sinai. They had seen God’s provision over the past year. They had eaten Manna, drank water from the Rock, dined on meat that God rained on them, and defeated Amalek in battle. We find in Exodus 32 that Moses had gone up the mountain to meet with God, leaving the people down below. 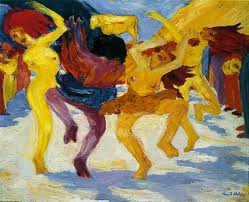 “When the people saw how long it was taking Moses to come back down the mountain, they gathered around Aaron. “Come on,” they said, “make us some gods who can lead us. We don’t know what happened to this fellow Moses, who brought us here from the land of Egypt.” (v1)  Aaron makes an golden calf, offers it as a physical representation of God, builds an altar, declares a feast (to the Lord), and the people offer burnt offerings and peace offerings. So, “the people sat down to eat and to drink, and rose up to play”

Keep in mind the same people were involved in this incident (at least a great deal of them were) as in Exodus 15. They still employed the same musical style as when they had previously worshiped God after crossing the Red Sea; however, here they are using their music in an idolatrous way. I think a question should be asked at this point. What makes their singing acceptable as worship in Exodus 15 and idolatrous in Exodus 32? What constitutes God music versus golden calf music? Yeah, you know; it is the object of worship and the disposition of their hearts.

In Exodus 15, the people were singing to God and about God. Their hearts were exalting him as the only true, holy, eternal God. The utilized their music and singing to glorify his name. God had wrought a great deliverance and they celebrated their Deliverer with the musical style that was indigenous to their culture. Around the golden calf, we find a people who had become impatient, setting aside all that God had done for them and crafting for themselves a “right now god” they didn’t have to wait on, a god they could see. They made for themselves a god that would meet their emotional needs of the moment. It doesn’t even appear that they were attempting to cast aside Yahweh, but rather desired to make him who they wanted him to be, and worship him they way they wanted to worship him- same people, same musical style, but idolatrous in its essence.

I don’t even pretend to think we have exhausted everything we could glean from this passage, but let’s stop here. What have we observed from the golden calf incident that helps us in our little study? How about the following: Musical style is not the defining element of authentic worship. The same style of music can be used in both the true, spiritual worship of God, and idolatrous abandon. It is the Object of worship and the disposition of the heart that makes God music.