Back in ancient Palestine, gathering around the well had been a place where it was not unusual for a future wife to be found. It was not lost upon the Jew of the day that it was at a well where Isaac’s wife –to-be (Rebekah) had been approached. So, while any self-respecting Jew of Jesus’ day normally wouldn’t publicly fraternize with a member of the opposite sex, he would have definitely avoided the “water-hole scene,” and he absolutely would not have been caught with a Samaritan woman at the popular “pick up spot.” So, it is not beyond the realm of speculation to imagine that the Samaritan woman who met a frazzled, worn out Jewish man on a hot afternoon beside  Jacob’s Well may have been thinking, “Don’t hand me no lines, and keep your hands to yourself.”

The day Jesus met the Samaritan woman, he was risking a lot. He risked being seen as unclean, flirtatious, unorthodox, and frankly, as a low life. But to our Lord, how he was perceived was not the concern. He was about the Father’s business, and doing God’s will sometimes puts you at odds with the status quo. In the Samaritan woman, Jesus met someone who believed in the scriptures (at least the first five books of the OT), expected Messiah, and had at least some knowledge of worship, yet was broken and misled. She had been drinking from a well which could never quench her thirst and needed the living water that only he could provide. And for her to get it, he had to put himself out there. She didn’t know what she thought she knew, and the only way for her to be made whole was to meet the Lord. Sound familiar?

All around us are people who need to meet Jesus, and that will only happen if we take Him to them. Too often, we are afraid of “getting dirty,” being misunderstood or loosing or reputation in the church if we are seen out amongst the “riff raff” of the world. We go to church and go through the motions all the while remaining motionless. The Bible says that Jesus had to go through Samaria. Well (no pun intended), he could have taken a much longer alternative route that would have steered him clear of those dirty Samaritans, but he had to go because that was why he had come. He came to reveal God to the world and reconcile fallen man with the Father. And Paul tells us that we have been given this same ministry of reconciliation.

“And all of this is a gift from God, who brought us back to himself through Christ. And God has given us this task of reconciling people to him. For God was in Christ, reconciling the world to himself, no longer counting people’s sins against them. And he gave us this wonderful message of reconciliation. So 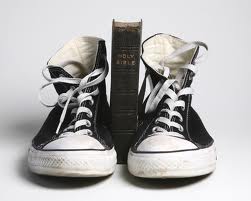 we are Christ’s ambassadors; God is making his appeal through us. We speak for Christ when we plead, “Come back to God!”(II Corinthians 5:18-20)

Okay, now for a big DUH question. How can we reconcile people we won’t go to? Listen, if we are not moved to reach out to the world with the gospel, all of our religious experiences must be called into question. Jesus said that we would receive power TO BE HIS WITNESSES when the Holy Spirit takes up residence in our lives, and sometimes; being a witness leads you to people and places you would not normally frequent. A true witness has to tell the truth about what he has seen no matter the cost.

You don’t have to hand people a bunch of lines, you’re not selling them a used car. You don’t have to be manipulative; just tell them what you have seen and heard regarding Jesus. And for goodness sake, don’t keep your hands to yourself. We are His hands and feet. Go, be intentional, reach out and touch those around you with the love of God.